Jean Baudrillard is a very varied cultural critic and thinker. His theories span across many fields ranging from technology, gender, international relations, consumerism, history and more. In his theoretical affiliation Baudrillard is considered to be postmodernist in orientation and poststructuralist, an orientation which is manifested predominantly is his occupation with systems of signification. Arguably Jean Baudrillard's most important work is "Simulacra and Simulation".

Perhaps the focal points of Jean Baudrillard's theories is the notion of meaning and self-referential manner in which meaning is produced in the postmodern age. Baudrillard draws on other important thinkers such as Foucault in trying to describe how systems of power relations in society are manifested in systems of representation and ideology (a tradition originating in Karl Marx's "The German Ideology" . 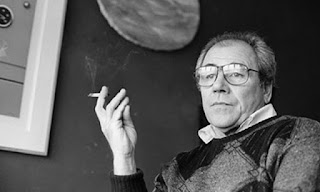 An additional important theory posed by early Baudrillard was his theory of object value systems which replaced production in Marx's theory for consumerism and the base of capitalistic society.  Baudrillard said that modes of economic activity are based not the constructed needs for producing but rather on the constructed needs for consuming, thus posing a new way to look at the manner in which an object acquires value. Basic theories such as Marx's and Adam Smith's focused on functional value and exchange value of goods. Modern sociology such as Bourdieu's theories added symbolic value to the equation. Baudrillard added the notion of sign value (such as the example of "brand") that is based on the manner in which the product is associated with signs functioning in a system (one can see how this is related to Baudrillard's ideas in "Simulacra and Simulation).

A late theory by Baudrillard is the one regarding the "end of history". Baudrillard hold the our modern notion of history is based on the notion of accumulating progress, which is nowadays breaking apart.  The West's victory in the cold war meant for Baudrillard not the victory of one ideology but rather the breaking down of the notion that there can be one final winning ideology and historical condition.  In other words, time itself is changing for Baudrillard with the collapse of linear thought.

The System of Objects
The Gulf War Did Not Taken Place

Recommended reading by and on Jean Baudrillard:

Sartre and the conflict between love and freedom

Forgive the Unforgivable: Derrida and the Paradox of Forgiveness

Forms of Capital: Bourdieu and 11 Ways to Be Rich

The Beauty Myth by Naomi Wolf

If you found what you were looking for and it helped you out, please consider helping me out by tipping whatever you feel is worthy of my efforts. Thank you! :)

Got article summeries, reviews, essays, notes, anything you've worked hard on and think could benfit others? why not contribute and mail them to us and we'll put them up for others to use (with credit).